If you have pine trees in your garden you probably have goldcrests too.  These tiny birds with their sharp beaks and fiery crowns used to be called Gold Crested Wrens.  They feed on insects and will come to suet balls.

In European Folklore goldcrests and wrens were known as “The King of Birds”. This mythology is reflected in the goldcrest’s Latin name R. regulus which means king.  This has its origins in a very ancient story retold by Aesop and Aristotle about a contest amongst the birds to find out who should be their king. The title was to be given to the one that could fly highest.  Initially all the birds expected the eagle would win, but as he began to tire a small bird that had hidden under the eagle’s tail feathers emerged and flew even higher proclaiming “Behold I am your king”

There are many other legends of goldcrest’s hitching lifts in the feathers of owls and other larger birds. An old English name for the goldcrest is the “Woodcock Pilot”, since migrating goldcrest would arrive a couple of days before the woodcocks.  Suffolk fishermen called goldcrests “Herring Spink” or “tot o’er seas” because migrating birds often landed on the rigging of herring boats. 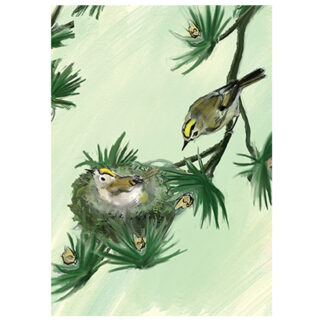