The wren is Britain’s most common breeding bird.  The  loud clear complex song of the male is amongst the first of the Dawn chorus.  He will build up to eight nests to attract his bride to be, but he is shy to be seen and we only catch occasional glimpses of him poking about in holes or skulking in thick clumps of brambles.

Wrens were once kept in cages as oracles. The Welsh called them “Dryw”, which is also their word for druid.  The English word Wren is derived from Drian, ie Draoi-en, “The Druid’s Bird”. Ancient Sumerian stories tell of a wren who outwitted an elephant.   A thousand year later Aesop recounts a fable about a congress of birds which had organised a competition to find the bird that could fly the highest.   The Eagle soured highest, but then a little wren that had hidden himself in his feathers flew a few inches higher and chirped “Birds look up and behold your King“.

The wren, sometimes called Jenny, Kitty-me-wren or Our Lady’s Across Europe they use his name to celebrate his kingship. The Latin word for wren is Regulus; Greek  Basiliskos (Little King); French Roilet (Little King). 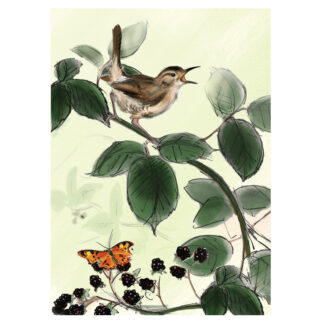