These butterfly cards are part of our Nature Notes Series which can be seen here: Greeting Cards for Butterfly Lovers and Lepidopteritsts

These pretty migrants from the Mediterranean used to be appreciated by Victorian and Edwardian butterfly collectors for their wide variety colours which can vary from vivid oranges and lemons to whites, they also have richly patterned lemon-green underwings.  The rarer pale almost white females (Illustrated) were most prized amongst collectors.

In the spring large numbers fly north from their southern overwintering strongholds, sometimes arriving in very large numbers and breeding again to produce what have become known as Clouded Yellow summers (1947, 1983).  The butterflies tend to congregate on chalk downland where they feed on the nectar of wild meadow flowers, especially clover, Birds Foot Trefoil, vetches and Lucerne.  Their caterpillars are unable to survive damp frosty winters.

Europe has 10 species of Clouded Yellows.

Crown Vetch: is native to Europe, Asia and Africa. Since its introduction to the U.S., it has spread throughout the country.  It is currently reported as invasive in many states, especially through the centre of the country and along the eastern seaboard 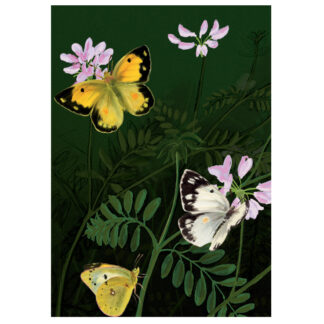