These cards are part of our Nature Notes Series

The Small Tortoiseshell cohabits with humans in our urban environments making it one of Europe’s most familiar garden butterflies.  In winter the butterflies are to be found hibernating in garden sheds, and are amongst the first butterflies to be seen flying on warm early Spring days.   In mid-summer you will sometimes come across their spikey black larva feeding on patches of nettles in the corners of the garden.  By the time Autumn arrives the new broods of fresh adult butterflies have emerged from their chrysalides and we see them feeding on the nectar of Buddleia flowers from which they make fat reserves for their long winter hibernation.

They do not migrate, but have a very broad distribution that reaches from Lapland inside the Arctic Circle down to the coast of N. Africa in the far south. Unfortunately in recent years this butterfly has suffered a worrying decline, but the cause of a recent decline is not yet known, although various theories have been proposed.  One is the increasing presence of a particular parasitic fly, Sturmia bella, due to global warming.

Nettles, like the tortoiseshell butterflies, thrive in urban environments where the soil has had its phosphorous and nitrogen levels boosted by animal or human waste, consequently it is a very nutritious foodplant that supports and protects the larva of some of our prettiest butterflies.  Nettles are a related species to hemp and for centuries their fibres were used to make cloth; in Danish burial mounds they found bodies wrapped in nettle shrouds, the use of nettle gradually died out after introduction of flax. Some believe the name is derived from Anglo Saxon word “noedl” meaning needle.  Others believe the origin with “net”, an Indo-Europpean verb to spin or sew. 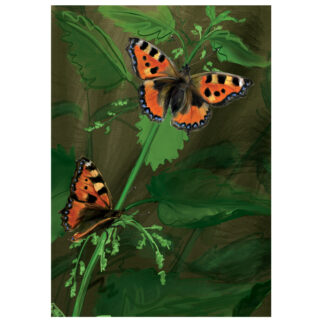