These butterfly cards are part of our Nature Notes Series which can be seen here: Greeting Cards for Butterfly Lovers and Lepidopteritsts

Cabbage White butterflies are in fact two related species that are more correctly known as Large Whites (P. brassicae (illustrated)) and Small Whites (P. rapae). They gained their nick name from their associations with the crops of cabbages that we grow in our gardens and allotments.  The two species are so closely related that, except for their differences in size, look almost identical.

Cabbage Whites belong to a family of butterflies generally known to butterfly lovers as “The Whites” (Pieridae).  The caterpillars of Pieridae have a unique ability amongst butterfly species to thrive on leaves of the mustard family of plants (Brassicaceae), this is in stark contrast to other butterfly families that have to avoid these plants because they cannot digest the toxic mustard oils that are produced when cabbage leaves are nibbled.  Thus it was that thousands of years ago the Whites were the only butterflies in a good position to take advantage of the new cross bred crops of turnips, radishes and cabbages that were developed by early farmers in Neolithic communities.

New DNA evidence suggests that ever since the Stone age Cabbage Whites, like the House Sparrow, have followed human migration across the globe.  It is estimated that in about 800 CE the butterflies travelled with trade caravans along the Silk Road from Europe to Far East and China.  In more recent centuries Cabbage Whites further expanded their territories by accompanying European colonists on their journeys to North America, Southern Africa and New Zealand (since eradicated).

The first brood of Large Whites start flying in early spring, and a second brood made up of adults hatch around July.  Where the climate is warm enough third or fourth broods can be observed in the late summer.  The butterflies also migrate in the spring flying north towards the poles, and in the fall south towards the more temperate Equator. 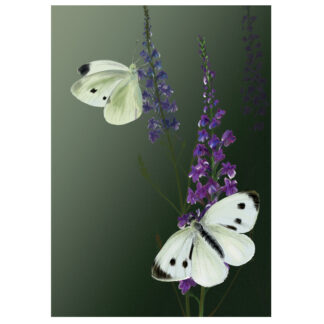