These butterflies are usually caught in the corner of the eye as a streak of vivid orange as they fly with a swift gliding motion along the hedgerows.  When resting they are easily identified by the jagged shapes of their wings.  If you get close enough to see one resting with wings closed you will see the distinctive white mark on the underside of the wing which resembles a comma from which the species gets its name.  The larva feed on elm and nettles.

The Comma has a very wide range from Southern Finland in the north to the coast of north Africa, however in the British Isles the butterfly’s range used to be restricted to the Wye valley and borderland between South Wales and England.  From the 1960s onwards the population exploded and it now common throughout England, Wales and even in Southern Scotland.

They can be seen at any time of year. They occasionally wake from hibernation on warm winter days, emerging properly in March.  The species are territorial and during the summer they love to bask and glide along the edges of woodland, and are also a common sight feasting on bramble blossom and blackberries.  Their numbers are highest in autumn when they will be seen in orchards fattening themselves on rotting fruit for their winter hibernation up 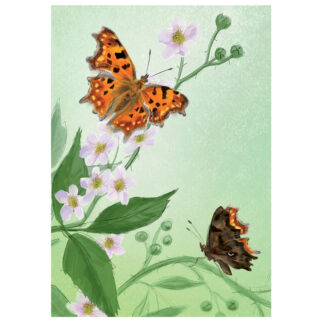