The “Blues” are members of Lycaenidae family, which is one of the biggest families of butterflies.  Within this group the Large Blue’s are very distinctive because of their larger size (2 inches, 52mm) and big black spots.  The adult butterflies emerge for a few weeks in June during which they lay their eggs on wild thyme or marjoram in the vicinity of a specific species of red ants (Myrmica). For the first weeks of their lives the caterpillars feed on seeds and flowers, then they drop to the ground and secrete pheromones and honey that trick local foraging ants to take them back to their nests. Once in the nest the ants feed them as if they are queen grubs, sometimes they eat so many that they push their host ant colonies to extinction.

Their range extends across Asia to Siberia, however in Europe they are increasingly rare and listed as endangered.  Britain’s population died out after well-meaning conservationists cordoned off the last native colonies from grazing rabbits.  This was a mistake because the ants with which the butterflies co-existed depended on short grass!  In 1979 new colonies were reintroduced in flower rich meadows where under careful management the densest populations of the Large Blues in Europe are now thriving.  In Britain the butterfly has become an icon of successful conservation. 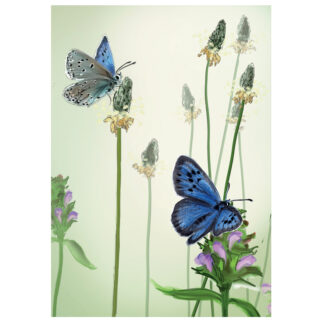