Whilst Marbled Whites look as if they should belong to “the Whites” family (Peridae), which feed on mustards and cabbages, they actually belong to another family known as “the Browns” (Satyrinae).  Their caterpillars feed on grasses such as Tor-grass, Sheep’s-fescue, Cock’s-foot, Timothy and Red fescue.  They are most commonly found living in large colonies on chalk down or railway embankments and other areas of wildflower rich impoverished grassland.

Marbled Whites are widely distributed across most of Southern Europe, Southern Russia, Asia Minor, Iran and as far east as Japan.  The species overwinter as hibernating caterpillars and are not very good are dealing with very cold winters, but as they are a migratory species their northern populations are replenished every year by butterflies that move north from their southern breeding grounds. 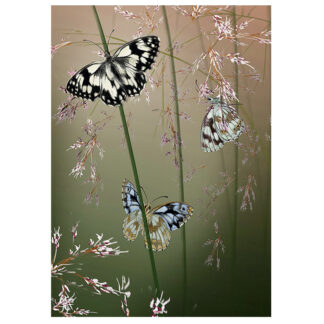