These strikingly beautiful butterflies were once called Red Admirable, which was a bit of a mouthful, so today we call them Red Admirals. They are members of the Nymphalidae, a family that includes many of the most colourful garden butterflies such as the Peacock, Small Tortoiseshell and Comma.

Red Admirals are strong fliers with annual migratory habits.  This is perhaps how they have established such an extensive range across North America, Europe and Asia.  The males spend their days patrolling an area against other incoming males, since females will only mate with the strongest and fittest, capable of holding a territory.  The Red Admiral caterpillar’s primary host plant is the stinging nettle (Urtica dioica).

Buddleia davidii  is commonly known as the “butterfly bush”, was imported into Europe in from central China.  Another nick name is “the bomb site plant” after its ability to grow out of rubble and unmaintained brickwork. 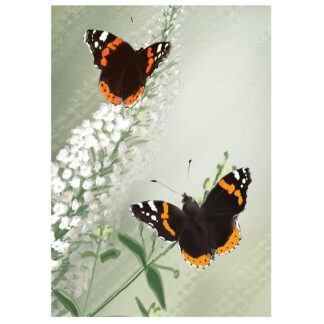