Swallowtail butterflies are large, colorful butterflies in the family Papilionidae, and include over 550 species.  Anyone who has visited Southern Europe will have noticed the European Swallowtail which is unmistakable butterflies, they seem to be everywhere.  In Britain we have a sub-species (P. marchaon britannicus) that only feeds on Milk-parsley and is now confined to a few scattered colonies on reserves in the Norfolk Broads.  Britannicus is a smaller, weaker insect than its Continental cousin (gorganus)

In recent years there have been increasing numbers of migrants of the larger and far more robust European varieties crossing the Channel and breeding.  The caterpillars of the continental gorganus feed on a broader range of umbellifers than our native sub-species; such commonly found plants as wild carrot, wild angelica, fennel and hogweed.  This silent invasion is raising hopes that gorganus could soon be established and seen more widely across southern Britain.

Almost all swallowtail species have forked tails on their hindwings from which they get their common name.  Their caterpillars are equally exotic, often marked with fake eyes to make them look more frightening to birds and armed with glands that excrete pungent smelling oils if disturbed. 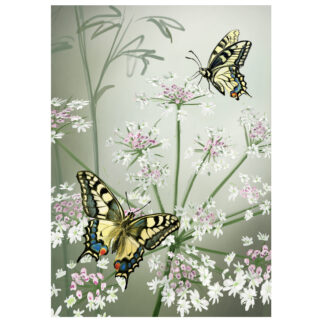